The key role of the library and the School Librarian is to nurture and inspire a love of reading for pleasure.

Reading for pleasure is the single biggest indicator of a child’s academic success, and National Literacy Trust research shows that children who enjoy reading are also three times more likely to have good mental wellbeing than children who do not enjoy reading. According to Empathy Lab, scientific research shows that reading also builds empathy, challenges prejudice and builds connections between us all. Reading makes us wiser, happier and kinder. At Holy Cross Prep, we believe in the power of reading and the girls reflect this with passion and enthusiasm.

Some of the ways we encourage reading for pleasure, in addition to our weekly library sessions, include two popular weekly lunchtime book clubs: one for year 2, and one for years 4 and 5, during which we read and review new books and complete various creative activities.

Our ‘Book of the Week’ can be found at the bottom of this page, as well as in the school’s weekly email newsletter, The Friday Update. These reviews and recommendations are also displayed in the library, complemented by the Year 5 Librarians’ own recommendations. Peer-to-peer suggestions are also always encouraged.

In year 6, pupils have the opportunity to participate in the annual Awesome Book Awards. The girls read and review five debut novels, vote for their favourite book, and attend a glittering awards ceremony during which the winner is announced.

Regular book events are organised by our Librarian, which include author visits and twice-yearly book fairs. We have enjoyed talks by a host of children’s authors, including Cath Howe, Timothy Knapman, David Melling, and Children’s Laureate, Cressida Cowell, acclaimed author of the ‘How to Train Your Dragon’ series. World Book Day is a highlight of the school’s calendar, with various activities planned to celebrate reading. Activities include a whole school assembly and costume parade, an interactive readathon, inter-class quiz competitions and ‘literary lunches’ in collaboration with our creative catering team. 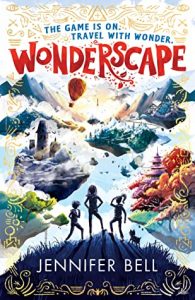 While investigating some mysterious exploding garden gnomes, Arthur, Ren and Cecily are sucked through a portal to another planet, 400 years in the future, and find themselves in an in-reality adventure game featuring famous historical characters. But behind the entertaining façade of the game, there is something sinister going on—can they solve the mystery of the missing founder and help the others trapped in the game before time runs out? Wonderscape is a thrilling world of imagination and possibility, perfect for fans of Anna James’ Pages and Co. series and Jumanji.

Book of the Week Archive 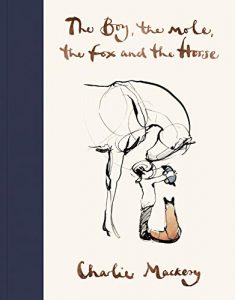 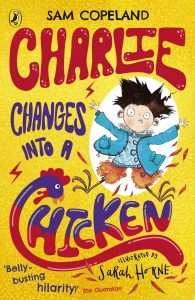 Juniors: Charlie Changes into a Chicken
by Sam Copeland
This is an extremely funny and extremely silly story about a boy who turns into all kinds of animals (except a chicken) when he feels worried.  It is charmingly illustrated by Sarah Horne and despite the slapstick style, it also contains a heartfelt message about coping with anxiety. 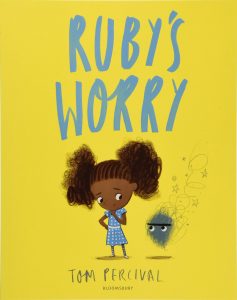 Pre-prep: Ruby’s Worry
by Tom Percival
For pre-prep readers I would recommend Ruby’s Worry, a lovely story that communicates the value of talking about your feelings.

Once George has seen his first dragon, he begins to notice them everywhere, and he realises that the dragons need to go home before they are captured.  He invents a magnificent mechanical flying machine, to lead the dragons back to the wilderness where they belong. The Dragon Machine is a beautifully illustrated adventure with plenty of entertaining moments and a wealth of little dragons waiting to be discovered on each page.

Aru Shah and the End of Time 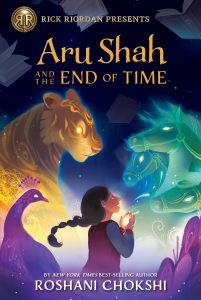 When 12 year old Aru Shah lights an ancient lamp for a dare, she unleashes the Sleeper and sets in motion a chain of events that could destroy the world. Together with her new friend Mini and a disgruntled pigeon called Boo, Aru must search for the Pandava brothers and find a way to stop the Sleeper from waking the God of Destruction. A funny, fast-paced adventure story based on Hindu mythology, perfect for fans of Rick Riordan. 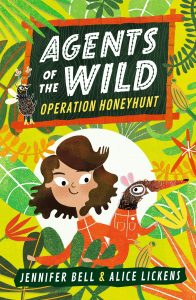 Agnes Gamble is a wildlife whizzkid who is recruited to be a field agent by a top secret organization called SPEARS – The Society for the Protection of Endangered and Awesomely Rare Species. Her first assignment is an expedition to the Atlantic Forest in South America to rescue a rare bee. Operation Honeyhunt brilliantly combines a funny, fast-paced story with a wealth of fascinating facts about animals and an important message about conservation. 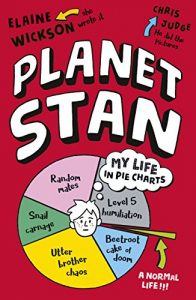 5 year old Fred is devastated when he finds out that the T-Rex skeleton, Rory, is being removed from the local museum to make way for a new environmental awareness exhibit and his eleven year old brother, Stan, is drafted in to help save Rory. This hilarious and heartfelt story is told through various pie charts, bar graphs and other diagrams and is perfect for fans of Tom Gates and The Wimpy Kid. 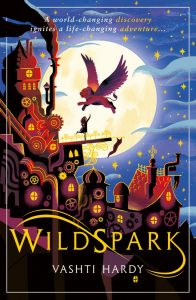 Prue Haywood takes her brother’s name in order to become an apprentice of the Ghost Guild of Medlock, where she will learn how to bring machines to life by harnessing ghosts. WildSpark is a thrilling, sci-fi adventure set in an innovative world of ghosts and robots, with an inspiring theme of girls in STEM. 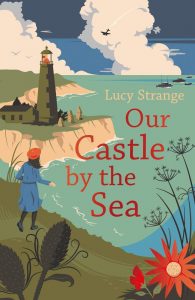 Our Castle by the Sea
by Lucy Strange

Twelve year old Petra lives in a lighthouse on the south coast of England but when war breaks out her mother is accused of being of spy and her family is torn apart. Petra must learn to be brave and try to clear her mother’s name. An atmospheric story of mystery, intrigue and resilience, set during World War II. 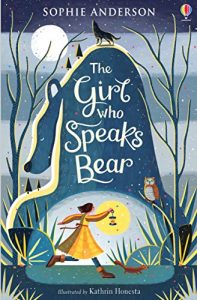 The Girl Who Speaks Bear
by Sophie Anderson

Yanka was found in a bear cave as a child and has always been taller and stronger than all the other children. After an accident leaves Yanka changed, she goes in search of the bear who raised her to find answers about who she is. This is an enchanting, lyrical adventure full of wonderful characters, stories, and a heartfelt message about friendship and family. 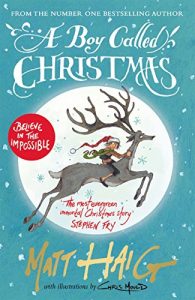 A Boy Called Christmas is story of the boy who grew up to become Father Christmas. This is a tale of adventure, snow, kidnapping, elves, a truth pixie and an eleven year old boy called Nikolas, who is not afraid to believe in magic – a funny, magical and festive story. 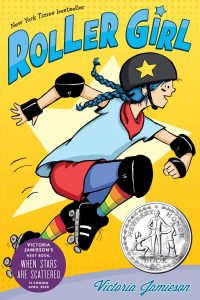 Astrid has always done everything with her best friend Nicole. So when Astrid signs up for roller derby summer camp, she is sure Nicole will join her – but Nicole signs up for ballet camp instead. A funny and empowering graphic novel about friendship, bravery and resilience. 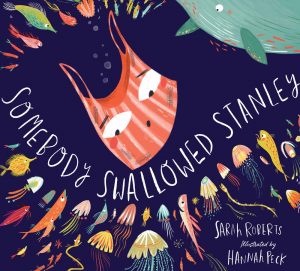 Somebody Swallowed Stanley
by Sarah Roberts

Stanley is a plastic bag but underwater he looks like a shimmering jellyfish – he does not mean to hurt anyone, but he does not belong in the sea. Eventually, Stanley is rescued and put to use where he will no longer be a danger to unwary sea creatures. Somebody Swallowed Stanley is a beautifully illustrated book with an important message – highly recommended for all ages. 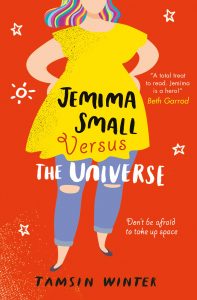 Jemima Small Versus the Universe
by Tamsin Winter

For Anti-Bullying week, Jemima Small Versus the Universe is a wonderfully funny and moving story that explores bullying, body confidence and learning to love yourself. It is written by the author of Being Miss Nobody (which won the 2019 Awesome Book Awards), and is suitable for years 5 and 6. 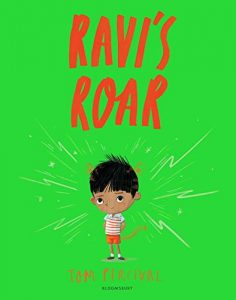 Ravi is the smallest in his family and he gets upset when he is not as quick and strong as his older siblings, but when Ravi gets angry and starts to roar he turns into a tiger. This lovely book about feelings, frustration and forgiveness is suitable for all ages and available in the library. 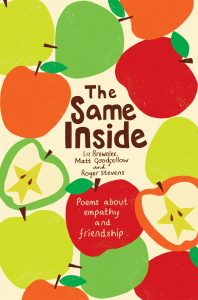 The Same Inside: Poems about Empathy and Friendship
by Liz Brownlee, Matt Goodfellow and Roger Stevens.

It was National Poetry Day yesterday and poetry is a wonderful vehicle to express emotion and create empathy. The Same Inside is a collection of fifty thoughtful and sensitive poems dealing with friendship, empathy and respect. It is suitable for the juniors and available in the library. 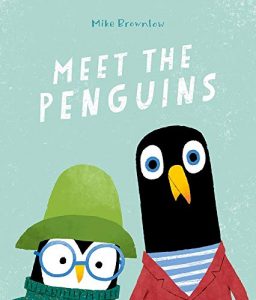 Meet the Penguins
by Mike Brownlow

Meet the Penguins is the charming tale of two penguins who want someone to play with but Elephant has big things to do, Fox is in the middle of something and Hippo is worried the penguins might make a mess.

This is a lovely story about friendship, kindness and inclusivity, it is available in the library and is suitable for Pre-Prep. 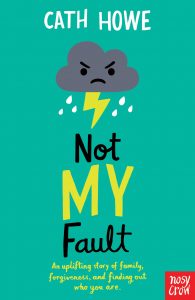 Not My Fault
by Cath Howe

Maya and Rose are sisters. The story is told from both Rose and Maya’s perspectives and beautifully illustrates the ways that siblings can know each other so well but also completely misunderstand each other. Cath Howe will be visiting the juniors in October to share her expertise and inspire the girls in their creative writing. Not My Fault is available in the library and as an ebook on Sora. It is suitable for years 3 – 6.