Feast of the Conversion of St Paul

St Paul the Apostle is one of the Church’s most important saints, as well as its greatest missionary. The feast of the conversion of St Paul celebrates how this important saint changed his ways to fulfil his mission to share God’s love with the world.
St Paul was born just a few years after Jesus and they lived not too far from each other, but they never met! Before he became a follower of Jesus, Paul – or Saul as he was known then – did not want to know Jesus and he did not want others to know Jesus either, so he hurt and bullied Christians horribly. He could not see that his actions were wrong or that God was deeply unhappy that Saul behaved this way.
One day God decided to stop Saul in his tracks. As he was travelling to a place called Damascus to track down more Christians, a bright light shone from heaven. The light blinded Saul and he fell onto the ground. Then he heard a voice speaking to him, saying ‘Saul, why are you persecuting me? This is Jesus and you are persecuting me.’ The people who were travelling with Saul helped him up. As he was still unable to see, they led Saul into Damascus where God healed him of his blindness. From that moment on, Saul changed his ways. He asked for people to call him Paul, which means ‘humble’, and he became a follower of Jesus.
St Paul was so determined to share God’s love that he made long and dangerous journeys to reach as many people as he could. He walked over 10,000 miles, visiting many countries. Sometimes he travelled by boat, and once he was even shipwrecked. With God’s help he survived and helped other passengers to survive too. He wanted others to know that if we love one another, forgive when mistakes are made, help those in need, and work together as one body, then the world will be as God intended.
St Paul wrote many letters to encourage people, some have become part of the Bible and we still use them to guide us more than 2,000 years later. Most Sundays, at churches all around the world, St Paul’s letters are read out so that Christians today can learn how to follow Jesus more closely. This week we have been thinking about how we too can become missionaries of God’s love, by caring for people close to home and far away, through our prayers and by sharing what we can. 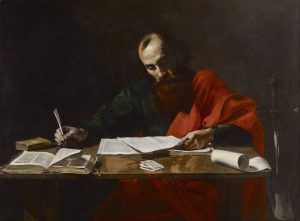 Big News for Little Ones in Kingston

“Our pre-school girls will enjoy all the advantages of our school – specialist teachers, renowned care, fabulous facilities and grounds. All in the heart of Kingston.” – Sarah Hair, Headteacher